As leaked before, Google finally and formally released Android 10, previously known as Android Q, to the world. That, however, might not matter much to most Android users who will still have to wait for their phone makers to roll out the update to their phones, if at all. It does mean that the guessing and waiting game for users has started but, at least for three brands outside of Google’s own Pixels, they might not have to wait that long.

Essential is, unsurprisingly, at the top of the game yet again. If established practices are to be considered, the Essential PH-1 already reached its end of life and final major Android update in May this year. But proving it could do better, the company was the first to roll out Android 10 to its phone.

Android 10 is now available on Essential Phone for select Open Market customers. Check your device for the update! https://twitter.com/AndroidDev/status/1168937703787978753 … 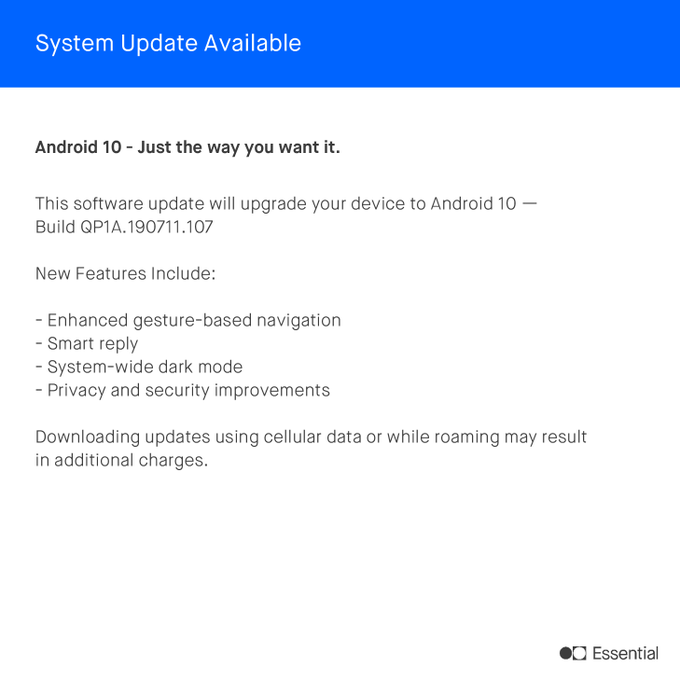 It was almost unbelievable that one of the earliest to also roll out Android 10 is Xiaomi’s Redmi sub-brand. That is the case of the Redmi K20 Pro that was part of its beta testing program. However, Xiaomi’s fast rollout is generating some confusion as it seems to only be true for the Chinese models of the phone. Those in India only got a beta copy that required an authorized Xiaomi account to use.

OnePlus, on the other hand, is more upfront that owners of the OnePlus 7 and OnePlus 7 Pro are still only getting a beta version. This time, however, it is an Open Beta Testing that anyone can grab at their own risk. When it plans to roll out the stable version of Android 10 is still unannounced.

Read more;  Huawei unveils its Android replacement and its name is ‘Harmony’

Unfortunately, the same can’t be said yet of other major brands like Samsung, Huawei, or LG. HMD Global is oddly silent but it did already announce the general update roadmap for its Nokia phones all the way to 2020. With IFA 2019 just days away, they might be too busy to bother.