That’s a steep price, but it will make you cool during the holidays. But is it worth it, given that other phone makers will be launching 5G smartphones with much faster internet throughout the rest of the world?

Patrick Moorhead, analyst at Moor Insights & Strategy, thinks that will be a liability in places like China.

“I know that 5G isn’t ready for everybody yet in the United States,” he said. “In China in the fourth quarter, or the first quarter of next year, it’s going to be a must-have feature. Qualcomm announced 150 handsets that are going to be 5G enabled. And I do think that it’s going to hurt Apple, not in the mid-range, but at the high end. And at a time when Apple’s losing market share. This is not going to be good for them. But again, 5G is going to small for a while.” 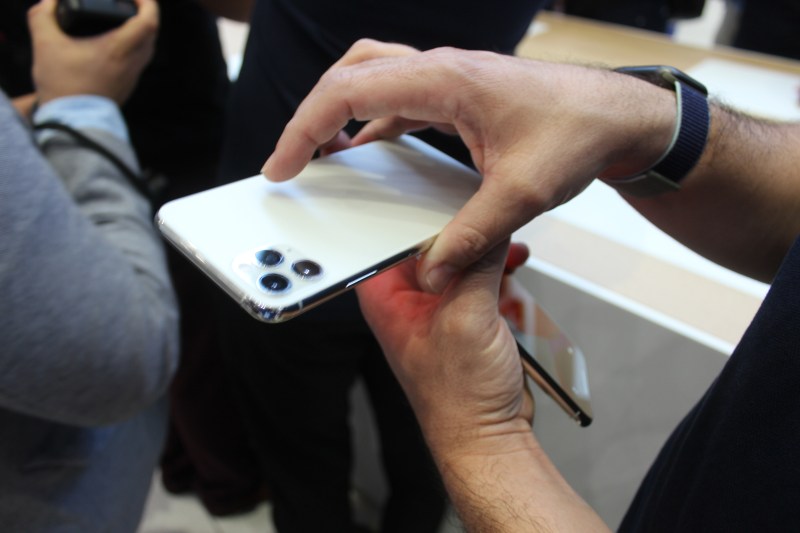 In the meantime, as you can see in the video, Apple is happy to talk about its great cameras. The iPhone 11 Pro and iPhone Pro Max come with three 12-megapixel ultra-wide cameras. Rather than just step back from your photo subject, now you can zoom out with the ultra-wide lens. It gives you a lot more flexibility when you are in the moment and you have to get a good shot.

You can use the wide or telephoto modes for portrait photos. The new cameras also have a large f/2.0 aperture. That brings in 40% more light than the phones from last year.

These smartphones replace the iPhone X and iPhone XS from last year, while the cheaper $700 iPhone 11 replaces the iPhone XR. The new phones have a “surgical-grade stainless steel” case and matte finish. It comes in midnight green, space gray, white/silver, and gold steel finishes.

With a feature dubbed deep fusion, the phone will take nine photos from the three cameras and stitch them together into one image. You can record footage from multiple cameras at the same time.

The Pro and Pro Max models will also have Night Mode, which lets you take high-quality photos in low-light or mixed light conditions. You can also take slow-motion selfies, or “slowfies.” Face ID will work better, thanks to the three photos. So you can unlock your phone faster using your face.

Like the iPhone 11, the Pro and the Pro Max use the A13 Bionic processor, which delivers better CPU and GPU performance as well as good machine learning processing. It also uses less power.

The Pro has a 5.7-inch screen and the Pro Max has a 6.5-inch screen. The screens are Super Retina XDR OLED screens with a 2 million to 1 contrast ratio and up to 1,200 nits of brightness. The phones support 802.11ax Wi-Fi 6 wireless networking.

Overall, Apple says the Pro will get four more hours of battery life than last year’s iPhone XS, and the Pro Max will get five hours more battery than the XS Max. Preorders start on Friday and the phones ship on September 20.