Following last year’s release of the completely redesigned Apple Watch Series 4, there wasn’t much buzz about what Apple was planning for its 2019 sequel, but Apple’s been quietly toiling away on something new: the refreshed Apple Watch Series 5. Highly similar to its predecessor, the Series 5 once again arrives in smaller (40mm) and larger (44mm) sizes, but with a series of casing and internal tweaks.

The tentpole feature is an always-on display that’s capable of maintaining all-day, 18-hour battery life while going from dim to full brightness as needed. Apple says that all of watchOS 6’s watch faces and apps have been updated to support the new feature, enabling people to steal a quick glance. Even though Apple Watches have always included OLED displays capable of remaining partially on for extended periods of time, the behind-the-scenes power consumption necessary to make this happen — with full access to notifications and sensors — would have killed the devices’ small batteries.

One of the tricks is a refined screen refresh rate that can fall as low as one refresh per second to conserve power. Others are found in new chips, including an Apple-designed S5 system-on-chip processor that otherwise isn’t being discussed in any detail — it boasts “up to 2x faster” speeds than the two-generation-old S3, alongside last year’s W3 wireless chip with 802.11n (Wi-Fi 4) and Bluetooth 5.0 support. This year, there’s also a built-in compass for better use of the Maps app independent of an iPhone, including a new Compass app, and 32GB of storage, up from Series 4’s 16GB. 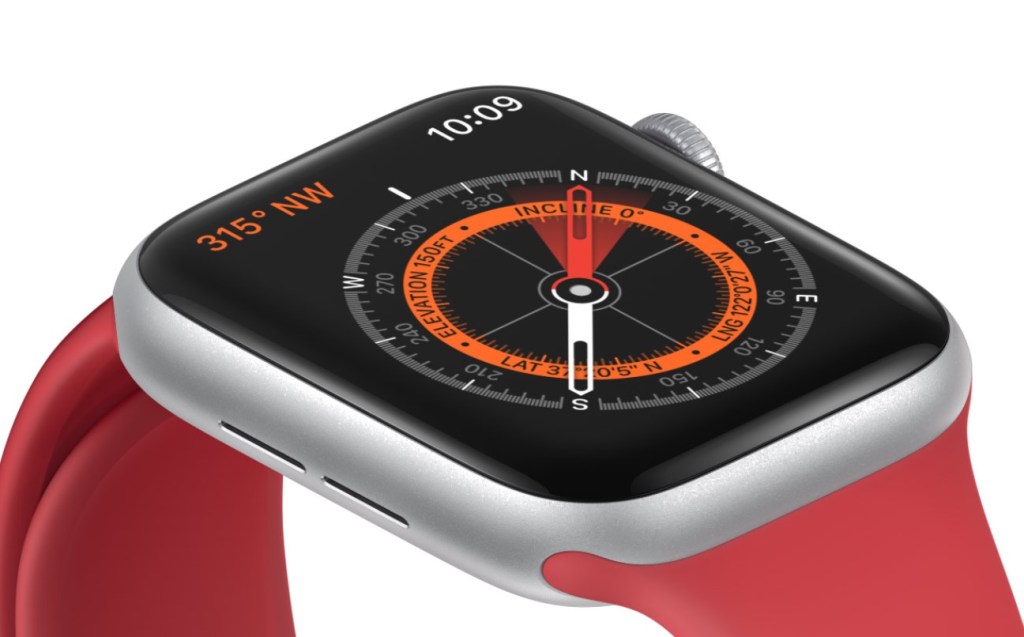 In addition to prior aluminum and steel models, Apple is also introducing two somewhat new materials for Series 5: titanium and ceramic. Apple Watch Hermès, the variant with pricey leather bands, will now be available in a second body color — black stainless steel — with new band options, while Apple Watch Nike+ will get its own new bands and at least one new watch face.

It’s worth noting that Apple previously used titanium in metal PowerBook laptops that were soon replaced with aluminum due to titanium’s susceptibility to paint chipping. While it’s unclear whether the Apple Watch will be more resilient over time, the standard version is uncolored gray titanium with a “special surface coating that prevents yellowing, staining, and showing fingerprints,” while a black version uses a carbon coating similar to the one in the stainless steel model.

Ceramic first appeared as a more affordable but still pricey replacement for the gold Apple Watch Edition, selling for $1,299 and up across glossy white and gray models before disappearing in Series 4. The new ceramic is only glossy white, notably with a white, black, and red Digital Crown.

Apple Watch Series 5 will be available at prices starting at $399, with a $100 premium for GPS + Cellular models. Stainless steel models will sell for a $300 premium over aluminum, notably including cellular capabilities for their $699 and up prices. Both the titanium and ceramic versions are being marketed under the “Edition” moniker previously reserved for ceramic and gold Apple Watches, with titanium starting at $799 and ceramic at $1,299 for the smaller 40mm versions.

All will ship with watchOS 6, announced in June, which notably adds a standalone Apple Watch App Store for direct downloads and a software update feature that can be triggered from the Watch rather than a companion iPhone app. watchOS 6 also brings a decibel meter for ambient noise measurement, a calculator with tip splitting, menstrual cycle tracking, and a voice memo recorder, among a host of other improvements to integrated apps. Premium GPS + Cellular Series 5 models have received an upgraded international emergency calling feature that can automatically contact local emergency services based on the user’s location.

The new Watches will hit stores on September 20. Visitors to Apple’s retail stores will be able to choose a “Studio” option to customize the Watch body with a band of their choice. Each watch continues to include one band for its asking price.

As the Series 5 is largely similar to the Series 4, Apple will be discontinuing last year’s model while keeping the 2017-vintage Series 3 around as an entry-level option, now for $199. Stepping down will mean dropping in screen size and processor performance while losing out on ECG functionality.