Reddit  users can now share to Snapchat their favorite content from the site, thanks to a new integration that allows sharing of text, link and image-based posts on iOS from Reddit’s “Safe for Work” communities. The move makes Snapchat the first platform partner with which Reddit is testing content sharing integration, the company says, and it hopes the result will be an influx of younger users to the site.

Unlike many social media platforms, Reddit has tended to skew a little older when it comes to its user demographics. According to Pew Research Center, just 22% of U.S. adults aged 18 to 29 used the site, compared with 34% of those 30 to 49 and 25% of those 50 to 64. And 19% were aged 65 and up, Pew found. While that particular study was performed a few years ago, a 2019 study continues to show Reddit as one of the lesser-used online platforms among all U.S. adults, Pew found.

And with a growing advertising business that’s set to cross $100 million in revenues this year, Reddit needs to even out its user demographics and increase its overall usage to be competitive. 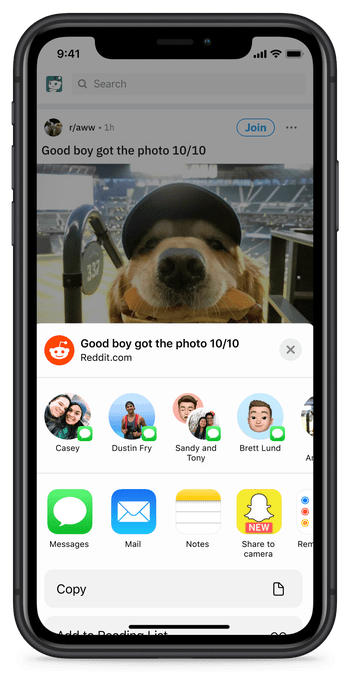 To use the new sharing feature, Reddit users who have Snapchat installed on their iOS device will be able to tap the “Share” icon on posts in the Reddit iOS app, then select the Snapchat option.

You can then choose to send the post to a few friends or post it to your story so all your friends can see it. The content will appear in Snaps and Snap Stories as a new sticker designed specifically for this integration that includes the Reddit logo and source information. 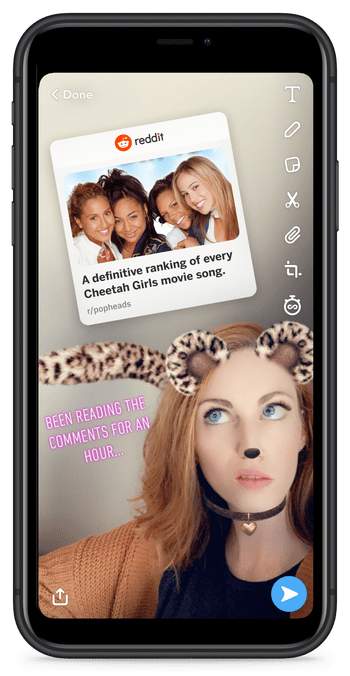 “Reddit empowers discovery and discussion that many Snapchatters love. With this integration, Snapchatters will be able to share interesting posts they find, adding new context and conversation-starters to their Snaps,” said Ben Schwerin, VP of Partnerships at Snap Inc., in a statement about the launch. “As shared Snaps drive engagement back to Reddit — this helps advance the power of community and connection across both platforms,” he added.

Because Reddit tends to host a wide range of content — some of which may violate Snapchat’s terms of use — the new integration is only being enabled on Reddit’s “Safe for Work” subreddit communities, which are those that don’t host adult content. The communities must also be in good standing, Reddit says. 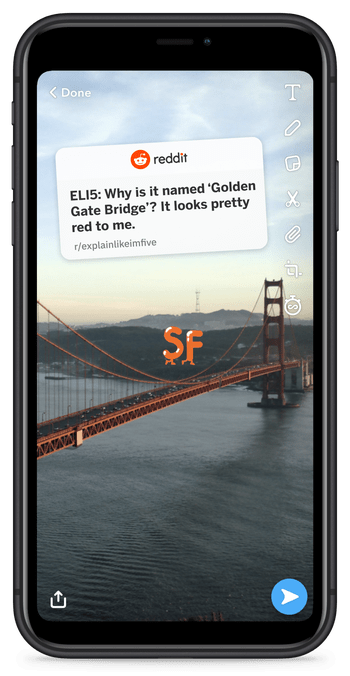 “Snapchat is the first platform partner with whom we’re testing a content sharing integration, and we’re excited to see how the feature will shape the sharing habits and experiences among our users,” said Vaibhav Sahgal, Reddit’s head of Growth Product, in a statement. “We hope the integration empowers redditors to share Reddit content more frequently, while simultaneously exposing new users to the unique content only found on Reddit.”

The launch follows Reddit’s $300 million funding round led by China’s Tencent earlier this year, which valued the site at $3 billion. This puts Reddit in competition with Facebook and Google for internet ad dollars — a challenge considering its user base has historically skewed older and male, and users are often anonymous.

The company says the sharing feature will roll out to Android users soon.